Well I have had Yvette, my motorcycle, for just about 3 years and it’s time to let her roam free to the next owner. In that time I haven’t received any major injuries and I’ve learned quite a bit about engines and myself. I can now mark this off my list of accomplishments/things I did in my life. I’m glad I did it. I absolutely loved it. I still truly love it.

You may wonder why I named my moto Yvette. Well, the movie Clue is one of my favorites and Colleen Camp’s character, Yvette,  is quite….awesome. Yeah, lets just say awesome again…Awesome!

I’m selling the bike for the sole reason that I’m just done with motorcycles all together. I wanted to end on a high note and just completed a 4 day 1,000 mile ride to the Great Smoky Mountains. It was incredible but I have taken as much of a chance as I want to take with it. Nothing is owed on the bike, it’s not a financial burden, it runs like a champ, and requires very little maintenance.

History/Description of the Bike:
The motorcycle is a 1996 Suzuki Bandit GSF600. It’s a very deep, dark green color that almost looks black. I purchased the bike on December 23, 2007 from a Student at the University of Southern Florida. He purchased it from a dealership in Tampa where the original owner traded it in.

When I purchased the bike it had it’s original tires, and just over 4,000 (original) miles on it. The previous owner only rode it around campus to class. He was an exchange student and didn’t want a scooter. I personally have done all the oil changes and maintenance myself except the most recent oil change. The bike currently has around 8,500 miles on it. When I first purchased the bike I took the carbs out and cleaned each one. I put on a pair of Metzeler Sportec tires and they now have close to 3, 000 miles on them. I also changed the spark plugs, and at that time checked each cylinders pressure with a pressure test gauge. Everything is nice and sealed.

Cosmetic Changes
I took the front fairing off the bike and replaced it with a 7″ round chrome headlight.  I have also installed a fender eliminator on the rear end, as well as low-profile LED blinkers on the front and rear. This updated the look of the bike and (improved?) the ride.

Recent Work:
On October 16 of this year I took the bike to Beach Blvd. Motorsports. They made sure everything was in tip top shape, changed the oil, and did a full safety inspection.

Recent Trip:
On October 21-24 I drove the bike over 1,000 miles from Jacksonville, FL to Gatlinburg, TN with varying speeds of 20-96 mph through cold, mountains, heat and I didn’t have a single mechanical problem. I took the bike on the Tail of the Dragon and had a blast doing it. It’s not a sport racing bike, but it handles much better than a cruiser. It was the most fun I’ve ever had.

Cosmetic Issues:
There are some small scratches on the ends of the mirrors, bar ends, and the left rear passenger handle. All pieces are very functional, but the bike has fallen over 2 or 3 times while I have owned it. The bike is typically parked on its center stand. In my previous apartment my neighbor, who I shared a garage with, nudged the rear tire with his car. The bike fell off of the stand, and the neighbor just left it claiming he just saw it like that. I was at work at the time, and gasoline leaked from the gas cap down the side of the tank.  The gasoline sat on the clear coat for almost 6 hours causing a 3″ x 1″ weird spot (in the clear coat) on the right side of the tank. The color is still perfect, but the clear coat on the tank could be touched up. This happened 1.5 years ago and I have not had any mechanical issues from this, only the clear coat flaw.

For Sale Details:
I’m offering just the bike, but also offering a “Starter Kit” for anybody purchasing their first bike, in need of all the extras…this “Starter Kit” will include every single thing I have for the motorcycle.

That’s right, its going to happen again and this time I’m doing it my way.

I’m going to the smokies again, but can’t decide on when to do it. I’m thinking late September or early October. I still have 90% of my supplies from the last trip so that makes things easy.

My last trip was pretty ambitious.  It covered 4,500 feet of elevation over a 30 mile period and is a major reason for the previous trip not being completed. This time will be better and I also get to ride the “Tail of the Dragon” on the bike instead of in a car. Woo!

Well Smoky never said that, but I like it and it’s my blog and I can make up whatever words a fictional character says.

Well Thursday (4/15: End of Tax Season) I’m getting laid off and I’m Super Excited. In a previous post I mentioned I was trying to do a cross country motorcycle trip that would take around 30 days. Well due to losing my job I now have the opportunity to do a 5 day backpacking trip in the Great Smoky Mountain National Park with my good friend Matt….Wooo! What do you when you don’t have a job? Vaca!

This trip doesn’t include my motorcycle, but it does involve hiking and camping….so 2 out of 3 isn’t bad. Plus, I still needed to buy a new wind screen for my bike and some decent saddlebags. When I get money…those items are going to happen. There is a road that we’ll be traveling down that I wish I could take my bike on known as Tail of the Dragon. It’s 318 curves within 11 miles!

So what is there to do in a National Park? Wrong question: What can’t you do? The weather is supposed to be great. Highs in the lower 70’s and lows in the mid 40’s. Now that’s great walking and sleeping weather.

Below is the itinerary. When I mention “campsite” it’s the only site around for a few miles. This isn’t  Hannah Park (which is awesome as well, but in its own way. Stayed there 2 weeks ago and had a blast at the beach). It is just a designated clearing with a fire ring  so that the park knows your location. When you check into the park there is no gate. Just a billboard where you fill out a permit and that’s it…you’re on your way to roughin it.

May look like a boring itinerary, but there is going to be a ton of walking, fishing, and just good ole’ enjoying nature. 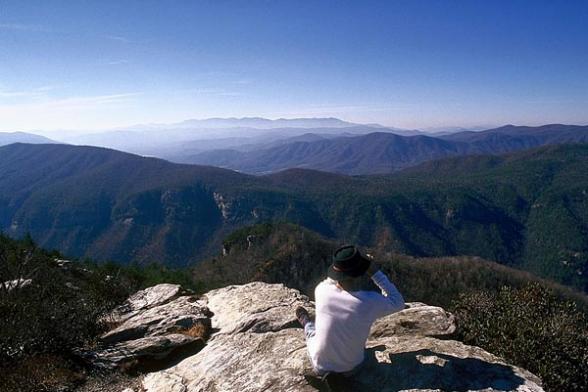